I recently installed Docker for Windows on my laptop. When I tried running the default docker run -it ubuntu bash demo from Git Bash, I ran into an issue I hadn’t seen before.

As it turns out, following the instructions and prefixing the command with winpty does work

However, I’m never satisfied with just getting around an issue, so I did some more digging. Turns out the issue here is the use of MinTTY to host the Git Bash prompt. If you’ve installed Git for Windows, you’ll recall the following configuration window. 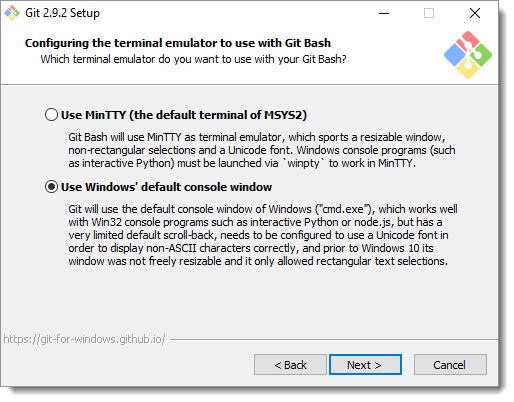 Personally, I prefer the default CMD console, especially in Windows 10 where features like window resizing and text selection are drastically improved. If you want to go back to that mode, simply re-run the Git for Windows installer and chose the non-MinTTY option. If you want to stick with MinTTY, you just need to prefix your interactive Docker (and Python, and Node, and …) commands with winpty.